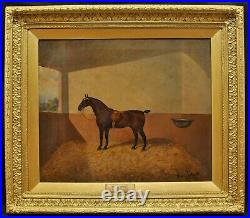 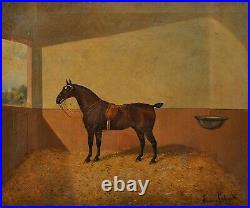 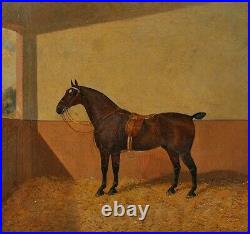 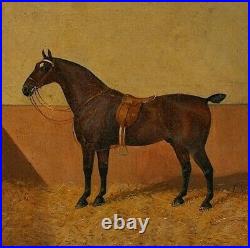 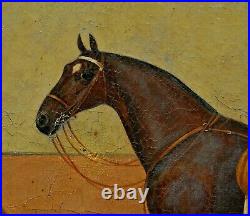 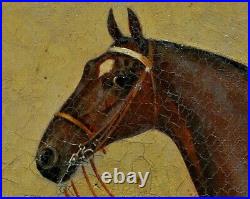 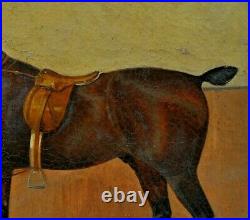 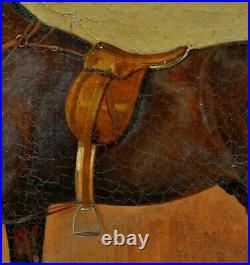 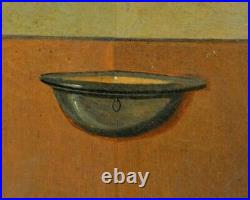 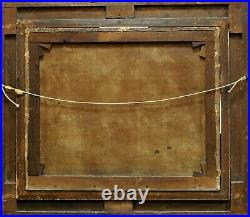 Fine British and European pictures, with new listings each and every week. 32 x 28 in (82 x 72 cm) framed approx. Fine large 19th century oil on canvas portrait of the bay hunter Bull-Dog in a stable by the animal painter James Albert Clark.

Excellent quality portrait of the saddled hunter by a member of the famous family of horse painters. Presented in a gilt frame with inscribed plaque. James Albert Clark was born 17 February 1863 to animal painter James Clark and his second wife Frances Mary Ann (nee Parsons).

They lived at 21 Walbrook Street, Hoxton, and later at 67 Riversdale Road, Islington. He had four older half-brothers who were also artists: Samuel James, Albert, Charles Lawrence and Octavius Thomas Clark. James Albert is best known for his horse portraits. The family's census return of 1881 gives James Albert Clark's occupation as artist/animal painter, he was then aged 18. Eight years later he married Mary Ann Blight and the couple had one daughter and one son. Mary died in the late 1890's and James subsequently married his cousin Frances Charlotte Parsons. They had one son and one daughter, and the family moved to Landseer Road in Holloway. During World War I James Albert Clark parted from his second wife Frances.

He moved to 79 Hanley Road, Islington, with his two eldest children and lived with Annie Keen, with whom he had another son and daughter. A friend of the family recalls that James used the middle floor of the house as his studio.

There he painted country scenes with unfinished cows, bulls, pigs, or horses, etc. He would then walk to the Islington Agricultural Hall with several of these canvases whenever a show was happening. He would sell these paintings to the winners, finishing details of their animal on the day.

Like his half-brothers and father, James Albert Clark is not known to have exhibited with any of the major art societies. He died in 1955, aged 92.

We are fine art dealers based in the historic civil parish of Sevenoaks in Kent. We source fine pictures from across the UK and continental Europe, many fresh to market from our exclusive contacts and sheer persistence. If you have any questions please get in touch and we will reply within 24 hours. We do not attempt to enhance our photographs by taking them in artificial conditions such as a light box.

All of our photographs are taken in natural day time room conditions and no filters are used on them. Buyers can be confident that what they see in the photographs is exactly what they will receive. Please be aware that the pictures we sell are of considerable age and will often have lived through several human life cycles. They will therefore show signs of age with imperfections, wear and/or restoration which is entirely normal and cannot be avoided. We endeavor to describe any major faults, but please be sure to look closely at the photographs to satisfy yourself with the overall condition of the item. If you feel that an item has not been described accurately please get in touch within 48 hours of receiving it. The item "JAMES CLARK (1855-1943) LARGE PORTRAIT HORSE IN STABLE ANTIQUE OIL PAINTING" is in sale since Sunday, August 8, 2021. This item is in the category "Art\Paintings". The seller is "sevenoaks-fine-art" and is located in Sevenoaks. This item can be shipped worldwide.