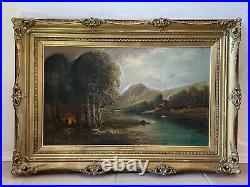 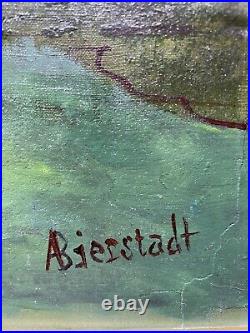 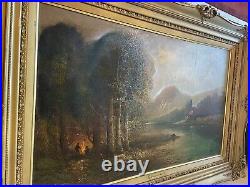 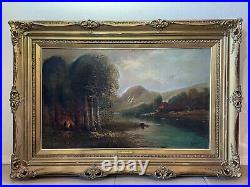 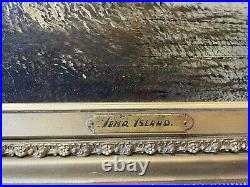 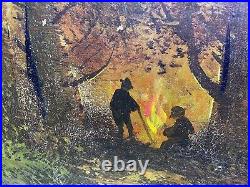 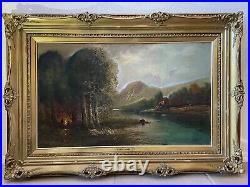 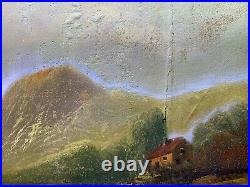 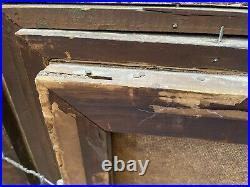 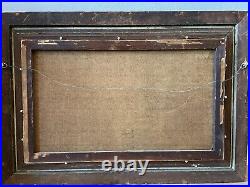 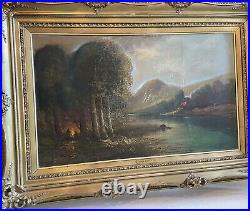 You are looking at a gorgeous Super Large and heavy oil painting signed, ABierstadt. This was found in New Mexico. Painting was executed on a vintage antique canvas/ panel. This appears to be a canvas mounted to wood panel.

It appears to be a study oil painting after the artists work. Imagery: Iona Island in New York USA. This is not a lithograph, print or etching. Dimensions : 35"x21" without frame. Frame has been repaired by an amateur.

Frame has many chips and cracks. Do not expect frame to be perfect. Canvas board has also been repaired over the years. There are many imperfections on surface but normal for a painting this age. It can use a good restoration, but is fine and ready to hang!

He was only about two years old when his family moved from Germany to New Bedford in Massachusetts. Along the route, he took countless photographs and made sketches of the majestic mountain ranges and dramatic rock formations which became the studies for his massive canvasses painted in his New York studio. In December 1857 the Boston Athenaeum bought one of his works, The Portico of Octavia Rome, thus assuring his career.

Bierstadt always loved mountains, and he visited the White Mountains before he left for Dusseldorf, for his signature appears in the register on top of Mount Washington on August 11, 1852. Sometime in 1859 or 1860, Bierstadt visited New Hampshire with his brother, Edward, working in the then new medium of photography. He stayed at the Conway House in Conway, listing himself as A. Bierstadt, New York, on September 13, 1862.

The artist's rugged, romanticized landscapes of the West, painted on a grand scale with an abundance of detail and dramatic lighting, captured the imagination of 19th-century art collectors and their interest catapulted Bierstadt to the top of the American art market. His paintings brought record prices and in his lifetime, Bierstadt enjoyed tremendous success and recognition. Bierstadt became internationally renowned for his beautiful and enormous paintings of the newly accessible American west, and his works found their way into public and private collections at staggeringly high prices for his time. His popularity and wealth rose to tremendous heights only to fade as the interest in the Boston School and impressionism turned public taste away from his highly detailed landscapes suffused with golden light.

In 1867 he married, and he and his new bride went to London. There he met with Queen Victoria.

His wife, Rosalie, needed to live in a warm climate for health reasons, so the couple lived in Nassau, and Bierstadt began to paint the tropics of Nassau as a result of his stays there. He died suddenly in 1902 and people seemed to forget his work until the 1960's. People became more interested in preserving the national lands of the USA, and his paintings began to be shown again.

Nonetheless, his paintings remain popular. He was a prolific artist, having completed over 500 (possibly as many as 4000) paintings during his lifetime, most of which have survived. Many are scattered through museums around the United States. Prints are available commercially for many.

Original paintings themselves do occasionally come up for sale, at ever increasing prices. Most of the art here, is found at estate sales. It has not been evaluated or appraised. The item "HUGE LARGE Signed Antique ALBERT BIERSTADT oil painting Study NEW YORK WOW" is in sale since Monday, November 8, 2021.