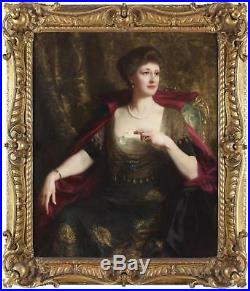 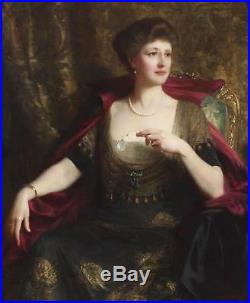 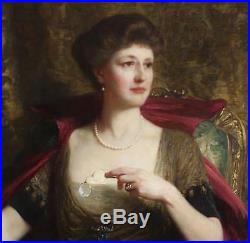 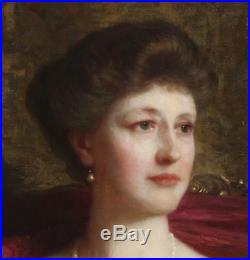 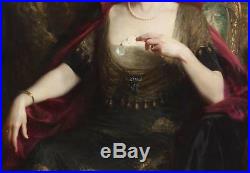 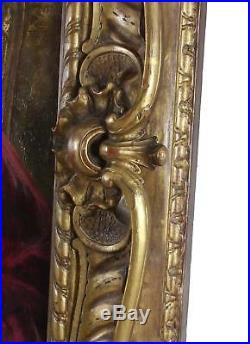 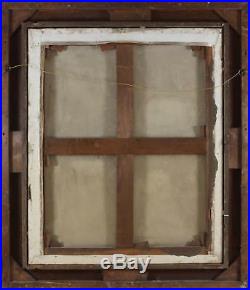 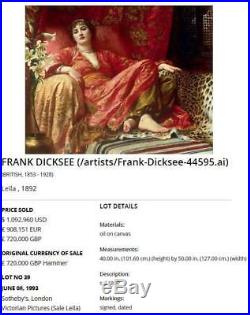 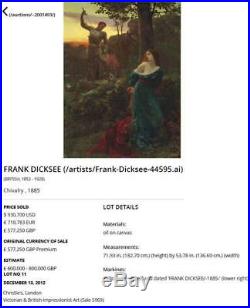 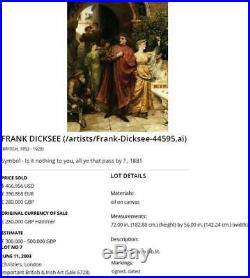 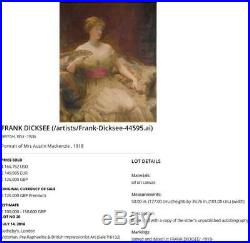 Frank Dicksee Huge Large Fine Antique Oil Painting Portrait of Noble Lady Signed. Violet married Sir John Page Wood, 5th Baronet, in 1906 but was widowed in 1912. Simon Toll (who authored a book on Frank Dicksee's life and work with a full catalogue of his known paintings and drawings) suggests that it is likely that the commission for this regal portrait arose through Margaret, Lady Brooke, The Ranee of Sarawak, who was Violet's aunt by marriage. Some other examples of works by this artist are included at the end of the photos. Frame: Set in the original, high quality, carved wood frame.

Signature: Lower right and dated 1916. Provenance: Exhibited: London, The Royal Academy, 1916, no. 428 (as `Lady Wood`) By descent in the family to Sir Anthony Page Wood, Bt. Condition: Painting and frame are both in very good condition. A few spots of re-touching in the margins to correct rubbing. Measurements: Painting measures 101 x 83cm and the overall frame 125 x 108cm. Biography: Sir Francis Bernard Dickse (London 27 November 1853 17 October 1928) was an English Victorian painter and illustrator, best known for his pictures of dramatic literary, historical, and legendary scenes. He also was a noted painter of portraits of fashionable women, which helped to bring him success in his own time.

Dicksee enrolled in the Royal Academy in 1870 and achieved early success. He was elected to the Academy in 1891 and became its President in 1924.

He was knighted in 1925, and named to the Royal Victorian Order by King George V in 1927. In 1921 Dicksee exhibited at the first exhibition of the Society of Graphic Art in London. Dicksee painted The Funeral of a Viking (1893; Manchester Art Gallery), which was donated in 1928 by Arthur Burton in memory of his mother to the Corporation of Manchester. Victorian critics gave it both positive and negative reviews, for its perfection as a showpiece and for its dramatic and somewhat staged setting, respectively. The painting was used by Swedish Viking/Black metal band Bathory for the cover of their 1990 album, Hammerheart.

A book on Frank Dicksee's life and work with a full catalogue of his known paintings and drawings by Simon Toll was published by Antique Collector's Club in 2016. If you are collecting in person and wish to pay cash that is fine too. Some countries are prone to import delays which are beyond our control, although we will do all we reasonably can to help resolve any problems that may occur. Please don't hesitate to ask any questions you may have.

We will always try to reply promptly. We will leave feedback as soon as feedback has been received so that we know the item has arrived safely. Auctiva offers Free Image Hosting and Editing.

The item "Frank Dicksee Huge Large Fine Antique Oil Painting Portrait of Noble Lady Signed" is in sale since Tuesday, April 9, 2019. This item is in the category "Art\Paintings". The seller is "europa-artwork" and is located in Wokingham.

This item can be shipped to all countries in continental Asia, United States, European Union member countries, Canada, Australia.