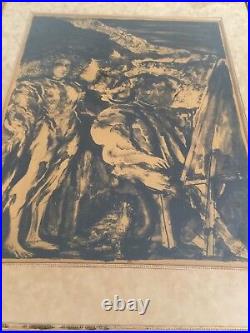 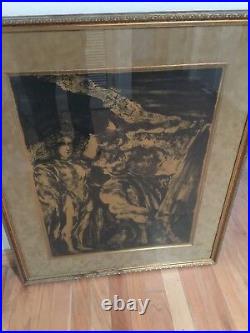 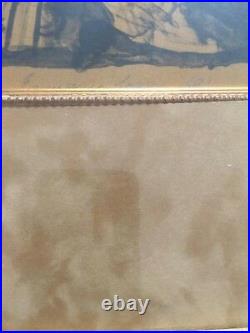 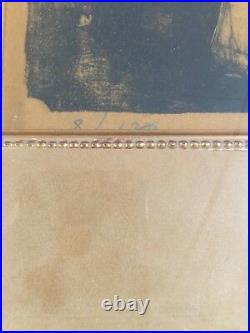 Printed upon thick, toned rag paper and with full, deckled margins. Fine, original example of the lithographic art created by the Mexican artist, Francisco Corzas, one of Mexico's masters of modern art. The relationship between passion and sexuality to art and the artist is a primary element of Francisco Corzas's work. With its haunting imagery, Easel (Artist and Model) explores such concerns. Easel dates from 1969 when the artist was living and working in New York City. Excellent - Minor wear consistent with age and history. Hand-Signed by the Artist in Graphite /Pencil. In the lower right, edition inscribe in by the Artist in Graphite /Pencil. Francisco Corzas Chavez was born in Mexico City on October 4, 1936. His parents Enrique Corzas and Regina Chavez originally from Quecholac, Puebla had walked all the way to the City in 1925 with their 4 children making a living as musicians.

Doña Regina played the mandolin while Don Enrique was apt to play the guitar and sing. In all, they had 11 children. Francisco was born only months after his older brother had his first son. At the age of 14 and with the help of his mother, Francisco studied at the Academia de Pintura y Escultura la Esmeralda of the Instituto Nacional de Bellas Artes.

Then, in 1956, he went to Rome where he studied fresco painting at the Academy of St. Giacomo and nudes at the Institute of Fine Arts.

His first solo show was held in Rome where he also was awarded the Second Prize at the Via Margutta International Art Fair. During this time he meets Bianca Dall' Occa Orsi, who would become his partner for 26 years.

Almost at the same time, he was awarded the Des Art Scholarship by the French Government and thus lived and studied in Paris for another year. He made two paintings for the Vatican: Prophet and Prayer.

He also completed 10 lithographs at the Caprini Workshop in Rome as well as some more in Milan. In 1976 he got a Scholarship from the Televisa Foundation. He worked on several more prints for the Olivetti Corporation.

Corzas had numerous individual and also 43 group exhibits throughout the world. He has become a master for the brightness of his backgrounds, the peculiarity of his characters, his female nudes and the sensuality of his works. He described his style as Goya influenced impressionism. It is also said that once as a young man he used a Goya pseudonym to sign one of his paintings that were to be entered in a Young Painters Contest. This great Mexican painter died in Mexico City on September 15, 1983, after a three year battle against pneumonia.