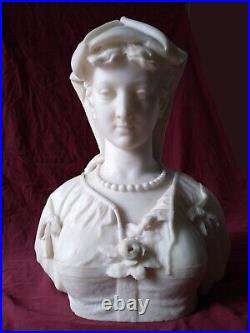 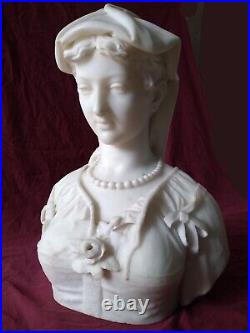 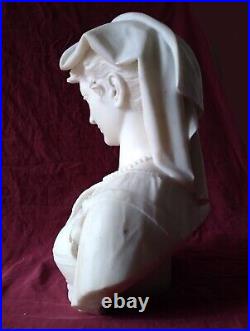 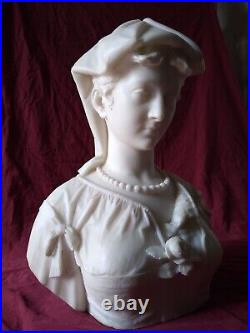 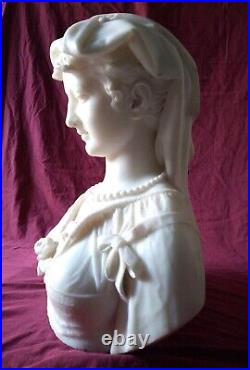 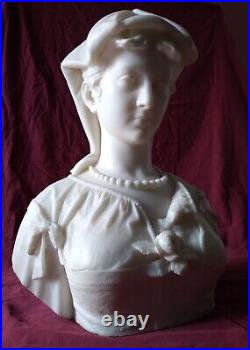 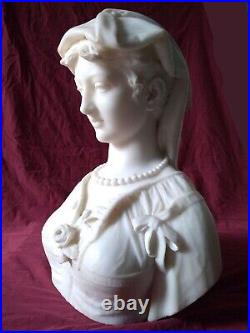 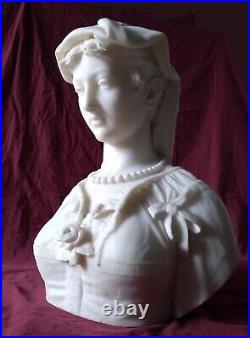 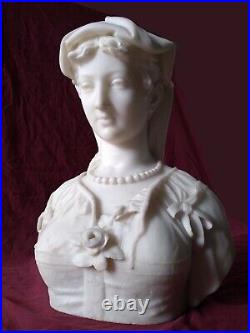 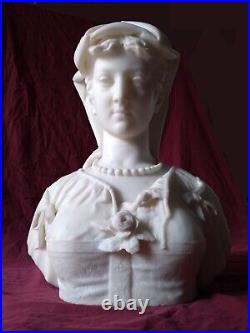 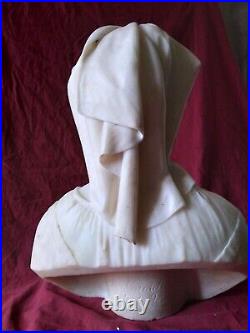 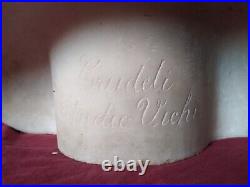 This is an antique, neoclassical and life size (or almost life size) female bust made in Carrara marble by Ferdinando Vichi (1875 - 1945). This is an extremely rare piece, because it is the only bust made by this renowned sculptor in the Florentine renaissance style i have seen (this artist usually made oriental and art deco female busts). If you examine this work carefully, you will see that this astonishing artwork depicts Florentine fashion with absolute mastery, accuracy and naturalness. But i can affirm that this sculpture is not just a representation of Italian beauty, but a sculpture inspired by a particular person: Simonetta Vespucci, model and muse of Botticelli's paintings and archetype of virtue and beauty from 15th century in Italy.

The nose, slightly pronounced (and which nevertheless maintains its feminine aspect of transcendental and classic beauty) is a characteristic that alludes to a specific and distinctive feature of Simometfa Vespucci that can be observed in Botticelli's paintings. Also this kind of dress, the headscarf and the necklace can be seen in Simonetta's portraits of the famous Italian painter. On the other hand, this work has a rare signature: Studio Vichi. This signature was used in the pieces made by Vichi that were exhibited by the artist in his gallery (in the same way that Pietro Bazzanti used the signature Galleria Bazzanti when his works were exhibited in his studio together with the works of Vichi and other sculptors of his time, as Cesare Lapini and Guglielmo Pugi). In such a way that, according to my research, i can suppose that this is a bust of Simonetta Vespuci, and probably the only marble bust of Simonetta ever made.

This female model inspired not only Botticelli, but also various artists of his day, including poets. However, I couldn't find any sculpture of her. The name of this bust is Crudeli (cruel) and it may alludes to Botticelli, since he was in love with Simonetta but was never reciprocated. Botticelli even asked to be entombed at the feet of his muse. Also the concept of cruel love was familiar to Botticelli, since he drew ´´The Hell of Cruel Lovers´´ for the Divine Comedy. This artwork is one of the most accurate and incredibly chiseled busts I have seen, with a serene and distinguished look. In the photos that I took, I turn the light to the sides to highlight, through the shadows, the exceptional attention to details. The ornamentation of flowers and leaves, the folds of the fabrics and the handkerchief, the knots on the shoulders, the pearl necklace and the subtle and elaborate embroidery of the dress give it an astonishing realism. The lightweight dress against the skin is fitted with a rope around the shoulders, allowing him to explore the small folds of a veil and reproduce them with incredible professionalism. It can also be seen how he manages to reproduce with the same talent the pearl necklace whose size decreases from the center to the back. He also precision-chisels a pin that goes through the folds of the scarf to hold it on the head. On the other hand, if you look at the work in profile, you will notice that the proportions and posture are simply perfect. Although the scarf was an habitual accessory in 15th century Florence, it gives it a religious aspect (since it resembles a nun's veil), as opposed to the worldly and sensual aspect that the dress that opens subjectively over her chest on the right side. This is another interesting feature since Simonetta was Boticelli's inspiring muse in paintings where she is seen completely nude and pagan - like the birth of Venus - and also in paintings where she is seen representing a saint.

If you look at the work from behind, it will be seen that the care I put into the details does not wane, and manages to reproduce the folds of the handkerchief falling on the back with the same dexterity. It can be said that the Vichi imposes a lot of challenges and details that he manages to achieve with incredible talent in this extraordinary and unique work. A really sublime sculpture for demanding collectors. From every angle this is a masterpiece or artwork.

There is an antique piece, so it shows signals of use, discoloration and minimal cracks or details. Measures: 52 centimeters (height) X 40 centimeters (wide) X 27 centimeters (depth). Discussing the life of an artist like Ferdinando Vichi is difficult. Amongst the greatest sculptors of our age, especially as a portraitist.

He was shy and almost backward in the face of every form of publicity. He was born into a noble family in Florence in 1875. In the early nineteenth century his grandfather founded the Gallerie Vichi, which soon became famous, especially abroad, and was later directed by Ferdinando himself. One of the Vichi Galleries headquarters was the Art Nouveau building of Via Borgo Ognissanti - two others were in Via Tornabuoni and on the Lungarno Vespucci. From his childhood he was passionate about art, and soon entered the Academy of Fine Arts in Florence under the guidance of Rivalta and Zocchi, where he won numerous prizes.

Still very young, he exhibited his work. Later he worked in Germany, France, England, the two Americas and India. The international criticism speaks of the young Vichi - not yet twenty years old. In the competition for the portrait of King Umberto for the Venice Chamber of Commerce, he was chosen together with two others out of sixty contestants, but in the final phase the competition was abolished. "For the artistic reason that the king wanted to entrust the execution of the bust to a Venetian".

There are many portraits of important characters made by him on commission, including three American presidents, MacKinley, Roosevelt and Taft, and also the Queen of Baroda. He also made numerous monuments to the fallen in many Italian towns, the monument to Senator Donato Marelli and a large number of tombs in England, Switzerland and America (among the most notable for the Bally, Phillips and Rawleigh families). Ferdinando Vichi won grand prizes and gold medals in various Italian exhibitions (including those of Venice and Livorno).

In 1907, at the age of thirty, he was awarded the title of Knight of the Kingdom. He then worked on the busts of Marshall Cadorna and Mussolini. This last portrait, depicting the duce in a simple Roman tunic, is praised by the critic of. Already mentioned above - and is defined as.

The most beautiful to date has been performed to eternal the effigy of the sacred Man for the destinies of Italy... And really no other bust like this of the Vichi would be worthy of being known and reproduced, where the image del Duce has to be memory, incitement, command. This bronze, together with the plaster, has unfortunately been destroyed in a period that was not inclined to distinguish politics from art. Of his other numerous works, the Vichi family currently possesses a large number of plaster casts (also in bas-relief) and some bronze pieces; the subjects, the poses, the same realisation (attentive to reproducing reality) are part of a nineteenth-century culture, certainly not an innovator (think about his contemporaries or even earlier sculptors such as Medardo Rosso, Boccioni, Rodin and others, who had already broken - each in their own way - the rule of fifteenth-century figurations).

Equally, in his sculpture there is a passionate skill and a harmonising force that dominates the forms, both in the busts and in the tiny clay sketches. When the subject is unique - a bust, a whole figure - we find the harmony in the pose itself, otherwise, when the central human figure is placed next to another, whether an animal or a a simple table, Ferdinando always finds a balance, an essential reciprocity between the elements depicted that, by uniting, become a new unity, aesthetically inseparable. Linked to the figurative art of the Macchiaioli, the sculptor Vichi almost never tends to represent symbolic or exemplary occasions, but rather wants to capture the intimate and daily moments, often trying to stop the movement of his figures in a thoughtful or reflective pose, an occasion of a solitary moment - an occasion almost always customary, almost never rhetorical.

In the cemetery of S. Miniato al Monte, high above Florence, there are tombs of the Vichi family with bronze busts made by Ferdinando, including those of his father, Orlando and a cuginetta who died at the age of six years. This item is in the category "Art\Art Sculptures".

The seller is "rarityland" and is located in this country: AR. This item can be shipped worldwide.