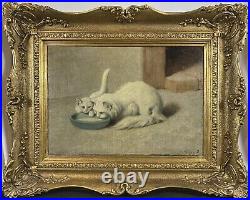 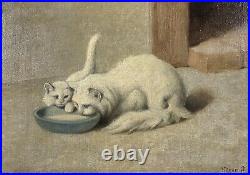 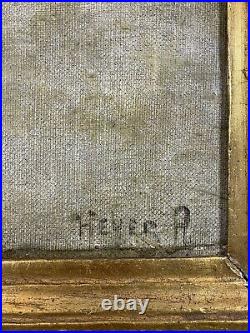 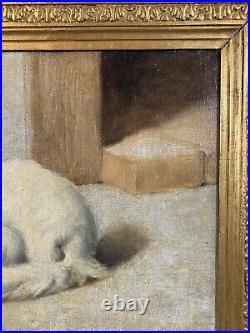 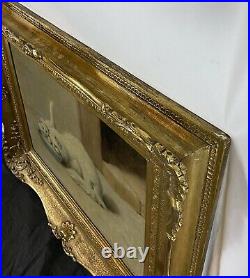 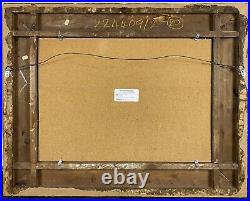 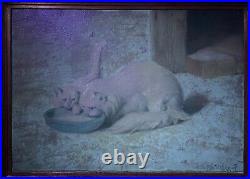 This listing is for the Antique c. 1910 Arthur Heyer Turkish Angora Kitten and Cat painting pictured above. This work depicts a small kitten and cat hovered over a blue bowl filled with milk. The kitten playfully places its paw on the inside of the bowl and looks at the elder cat, who leans in for a drink.

The pair lay on the floor outside of a brick/tile doorway. The work is an oil on canvas laid to masonite. It is signed by the artist in the lower right.

It is housed in an exceptional, large period gilt wood frame (possibly original to the work). Heyer's paintings of white cats are highly sought after, and this is a wonderful large example at a low price point.

Arthur Heyer (1872, Germany - 1931, Hungary) was a German-Hungarian painter who primarily painted animals. Heyer painted numerous animal pictures, especially cats. There are many pictures, often commissioned by the artist, in which Turkish Angora cats, painted in many shades, are depicted in naturalistic terms. For this reason he was also called "Cat-Heyer". In addition, he produced several pictures of other animals, such as deer, hares, pheasants, chickens, and dogs (mainly his dog Mucki).

Today these are often distributed as art prints or posters. In 1906, he held his first exhibition in Budapest, followed by many others.

In 1909, he also had two exhibitions at his earlier home in Thuringia, the Grand Ducal Museum in Weimar and the Kunstverein Gotha. In 1911, he received the Hungarian Count Andrássy Prize.

After several exhibitions, including at the Vienna Künstlerhaus and the Glaspalast in Munich, he was appointed professor there in 1915. In 1919, he published two children's books with verses of animals supplemented by verses: Im Wunderwald, ein Märchen and Niki, eine drollige Hundegeschichte. In 1929, the Hungarian National Museum in Budapest acquired his self-portrait. In 1931, he died in Budapest at the age of 59 and received a state funeral at Kerepesi Cemetery.

Frame with age cracking and typical wear/losses. I frequently receive messages from people after I sell an item, asking if it is definitely gone. If something catches your eye, don't hesitate to inquire!

Feel free to ask any questions. This item is in the category "Art\Paintings".